I’ve always had a fascination with movies and the moving image since my Dad first showed me Superman as a child. I was hooked – how were they able to make us believe a man could fly?

The VHS camera my parents bought when I was 8 sealed the deal on my new found obsession and allowed me to experiment. I rode a bike while looking through the viewfinder in the VHS camera for what could be considered my first Steadicam-like shot. I shot my first short film in high school using a ladies stocking on the front of the lens to give it that sought after film look. We had a TV production class in high school, where every week the content aired in homeroom to the entire school. I came out giving high fives in the hallway to my classmates as they passed by. I was hooked. I was excited about the impact I had on my classmates. I took the camera to its limits and that perspective continues to shape my approach today.

When not behind the camera working, I spend most of my time chasing after my two young daughters. Traveling to wine destinations and enjoying the outdoors with my wife are both a passion, while a healthy obsession with Superman has always kept me a kid at heart.

So what’s your story? 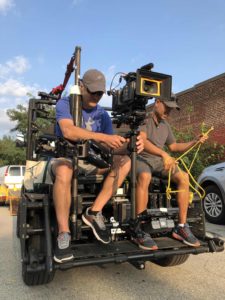